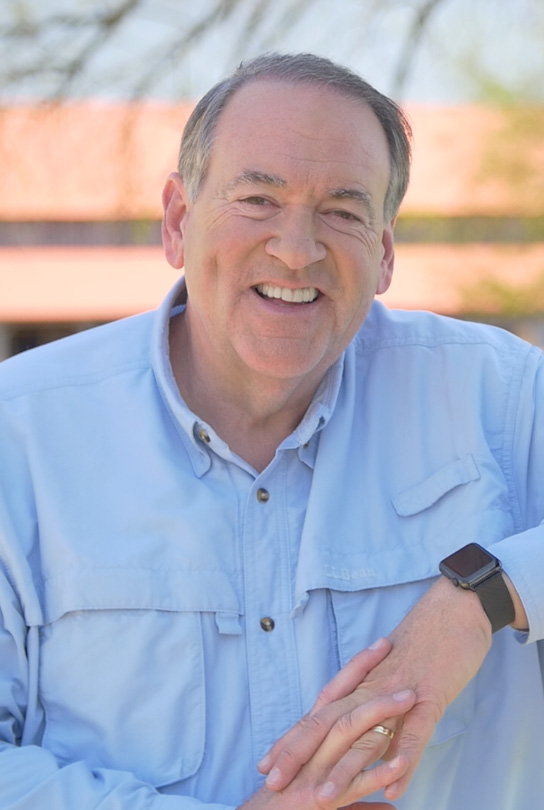 Mike Huckabee is the host of the TV show “Huckabee” on TBN each weekend and is a Fox News contributor, NY Times best-selling author of 14 books, and a frequent speaker for corporate, civic, and non-profit groups all over the world. He also hosts the podcast “Huckabee” on Quake Media. He was the 44th Governor of Arkansas from 1996 until 2007, becoming one of the longest serving Governors in his state’s history. He left a legacy of tax cuts, job creation, the reconstruction of his state’s road system, K-16 education reform, and a nationally heralded and duplicated health initiative that focused on prevention. His administration fought long-standing corruption in the state’s political machine, resulting in numerous indictments and convictions of powerful legislators and other elected officials. He ran in 2008 and 2016 for President, finishing 2nd in the Republican primary in 2008.

He is a frequent visitor to Israel since 1973 and since 1981 has been taking groups to the Bible Lands.

Governing Magazine named him as one of its “Public Officials of the Year” for 2005, and Time Magazine honored him as one of the five best governors in America. He served as the Chairman of the prestigious National Governors Association as well as the Education Commission of the States, the Southern Governors Association, and the Interstate Oil and Gas Commission. He has been nationally recognized for his advocacy of the arts in education and raises money to provide musical instruments for children.

Huckabee an avid musician since age 11, is a bass player and often joins guest artists on his weekly television show, having played with Willie Nelson, Lynyrd Skynyrd, Toby Keith, the late George Jones, and many others. He owns radio stations in Arkansas and Missouri.

His hobbies include hunting, fishing, and music. He was named one of the “25 Most Influential People” for Conservation by Outdoor Life Magazine, and was named “Man of the Year” by the American Sportfishing Association in 1997. The former governor and his wife, Janet, spend time in Arkansas and have three grown children – John Mark Huckabee, David Huckabee and his wife, Lauren, and Sarah Sanders and her husband, Bryan – and seven grandchildren.

The Freedom Foundation cordially invites you to join us for dinner and an opportunity to hear former Arkansas Governor Mike Huckabee speak on the important work the foundation does.

The event will be held at the Grand Hyatt in Bellevue Washington on September 24th.

If you would like to be a table sponsor this year, please call 360-956-3482 and speak with Andrea or Margeret.