If you have a school-aged child who would otherwise be in school, but your district is not offering or allowing in-person schooling, the least you deserve is to know why.

It could be a governor’s order and health directives preventing individual counties or municipalities from doing in-person school, but depending on your state, it’s even more likely that local health officers and school boards are the ones deciding to prevent schools from fully opening.

Frequently, it’s up to the school board itself. While it may defer to health officers’ concerns or advice, it is the elected officials’ choice.

Remember, “It doesn’t matter who the president is.” During most elections, people focus on the top of the ticket, reading about those running, following scandals and gaffes, posting on social media, and participating in sign waves.

School boards, sheriffs, city and town councils, and county commissioner races have much more significant and immediate consequences for you and your family. Ironically, you also have tremendously more ability to influence the outcome.

Depending on the district, there may be lots of pressure from parents and teachers to go back to in-person instruction.

For example, more teachers in Moses Lake were interested in returning to school under a hybrid of in-person and remote than 100% remote. There was also greater support for going back to in-person-only instruction than entirely remote. 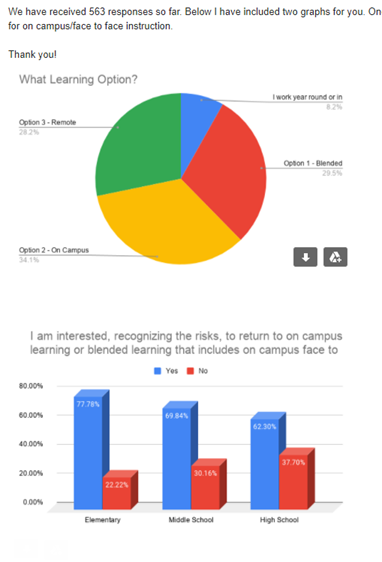 Pressure not to reopen comes from governors like Jay Inslee, who are funded and supported by the teachers’ unions that also oppose getting back to in-person instruction.

In fact, the Moses Lake Education Association president Jay Mather publicly came out speaking on behalf of the teachers in opposition to going back to in-person schooling while acknowledging that his position was not popular, not even with those he is supposed to represent.

Moses Lake School District is a prime example of what it looks like to have top-down pressure without a mandate.

The Health Officer for Grant and Adams counties, Dr. Brzezny starts at 5:00. If you want to get to the exchanges between the elected officials and the county health officer, skip to 1:38:00 of the 8-13-2020 School Board Meeting (via Zoom).

There is a fascinating and telling exchange between several school board members and the county health officer.

The health officer makes it abundantly clear he believes it’s not safe to reopen in-person instruction. Simultaneously, the health officer refuses to use his authority to prevent the schools from opening.

The question is why. Why would the health officer, the person whose job it is to make the call if schools can open or not, refuse to prevent the schools from opening if he believed so passionately that it was unsafe to open?

If the health officers’ professional opinion that in-person instruction is unsafe, does he not have liability when publicly refusing to prevent such actions, which is his prerogative, and is his job?

If you are interested in your children getting back to school, make sure you are spending as much time, if not more, focusing on your local elections than you are on top of the tickets races.

Quotes from the meeting, not in order:

“Sir, what is the metric you would use to close schools in the future?” Bryce McPartland

“The metrics are not yet defined.” Dr. Brzezny

In Grant County, “There are six confirmed cases and one suspect If I remember correctly,” Dr. Brzezny

“Do you think COVID is ever going to go away?” Shannon Hintz

“No, I don’t think it is ever going to go away.” Dr. Brzezny

“You are not telling us that we cannot open, correct?” Bryce McPartland

“You have the authority to close the schools, correct?” Bryce McPartland

“The answer is yes. The health official has the authority to close the school and do whatever else is necessary…(but)The decision is yours, with the consequences.” Dr. Brzezny

“But you are not exercising that authority at this time, is that correct?” Bryce McPartland

“I am telling you not to reopen them.” Dr. Brzezny

“Are you issuing a health order preventing us from opening schools with in-person instruction?” Elliott Goodrich

“It is a board decision.” Dr. Brzezny

If this topic interests you, please listen to the whole 8-13-2020 School Board Meeting.