It’s bad enough the city of Portland wasted time and taxpayer dollars in a hopeless quest to ignore the state’s unequivocal public information laws in the first place. But this spring its attorneys — doing the bidding of the union representing about 600 of the city’s public employees — doubled down by keeping alive a lawsuit they had already lost.

The result was another humiliating setback in court and who knows how much more of the public’s money flushed down the toilet.

A year ago this month, the Freedom Foundation was contacted by a Portland city employee anxious to see his union, Laborers’ International Union of North America (LIUNA) deauthorized.

To help him contact his co-workers with his deauthorization petition, the Freedom Foundation submitted a formal request for the names of Portland city employees in his bargaining unit — by law, a matter of public information.

LIUNA responded by launching a vicious hate mail campaign against the employee. It then contacted Portland’s city attorneys and urged them not to give the records to the Freedom Foundation.

There were only two problems:

First, LIUNA’s hate mail campaign was illegal. Secondly, the Freedom Foundation’s records request was no different from hundreds of prior requests for public employee information with which the city had routinely complied.

Portland proceeded to deny the records request anyway, forcing the Freedom Foundation to file an appeal to the Multnomah County District Attorney, who wasted no time in ordering the release of the records.

The city’s attorneys begrudgingly did as they were told, which should have ended it.

But then, they inexplicably asked the Portland City Council if they could waste even more of the taxpayers’ money by suing Freedom Foundation for making a perfectly valid information request.

When the city council members (even more inexplicably) agreed, a lawsuit was filed.

“The city brought this action under ORS 192.411(2) after the district attorney ordered it to “promptly disclose” records requested by the Freedom Foundation, which the city had withheld. I have jurisdiction under ORS 192.411(1) to enjoin the city from continuing to withhold the records. But at this point, there is nothing to enjoin… The city says that it has produced all of the records covered by the request, and the

foundation agrees… You’d think the city would be happy with that outcome, but it’s not… That leaves me nothing to do but deny the city’s motion…”

LIUNA’s rationale was clear. Its leaders didn’t mind the city filing an unwinnable lawsuit because, while the failure cost the residents of Portland tens of thousands of dollars, the union paid nothing. More importantly, the union hoped to bleed the resources of the Freedom Foundation which, unlike the city, can’t ask the taxpayers to pay for its irresponsibility.

The punch line is, the city was ordered to compensate the Freedom Foundation for its legal expenses.

So at the end of the day, it’s worth counting up the score: 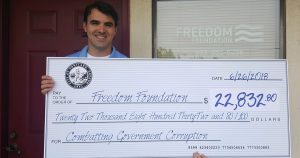 Unfortunately, the people of Portland were betrayed by their elected leaders and city staff, whose actions once again clearly showed their primary loyalty is to the special interests that pull their strings rather than the constituents who elected them or the ideals of open, honest government — let alone the laws and constitution they gave their solemn oath to preserve.