Nearly every reasonable person understood the concern over an unknown virus. Few took any issue with the governor’s emergency declaration or even some of the more extreme measures to follow.

When the shelter-in-place order was first issued, it wasn’t enforced but was merely a suggestion. Many thought it was an overreaction, but most were willing to comply.

Little did we know the proclamation was the beginning of a long train of abuses that would lead to hundreds of unchecked, unilateral decisions by the governor. 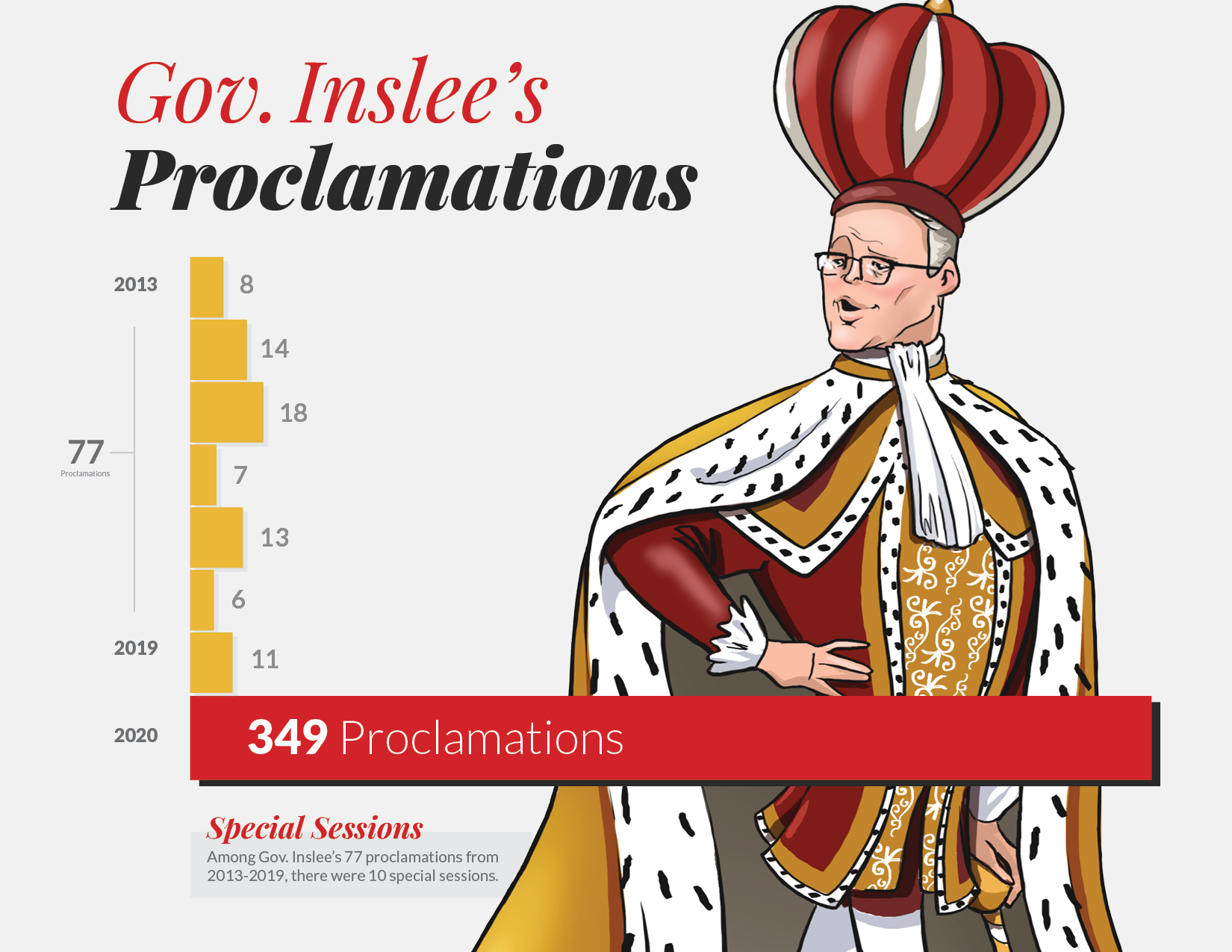 Since Gov. Inslee took office in 2013, he has averaged 11 proclamations per year, totaling 77 before 2020. Most of the proclamations have been declarations of emergencies; 10 were calls for a special legislative session.

Inslee has now made more than 349 proclamations in 2020 without calling for a special legislative session. Making things worse, he disbanded the bipartisan business recovery task force composed of lawmakers and replaced it with the Safe Start advisory groups made up of campaign contributors and political allies.

The governor’s poorly-thought-out, unilateral actions have — in contrast to his stated intentions — led to large gatherings and protests becoming commonplace.

Obvious but unintended consequences have included unnecessary use of 911 emergency services and verbal and physical assaults against service workers and customers who refuse to wear a mask.

NPR reported Home Depot would not enforce Washington state’s mask mandate because it was not safe for its employees. (The retail chain later changed its position)

In the current, highly charged political climate, COVID-19 is both a health concern and a political football. Depending on who you talk to, some believe this issue is directly related to public health. Meanwhile, others do not find any legitimate justification for considering extreme actions to benefit public health and believe it is entirely political.

Is this about science or politics?

We must rein in the seemingly unlimited powers the governor believes have been bestowed upon him through the issuance of unilateral dictates and proclamations.

The Seattle Times and several other newspapers have repeatedly called for a special legislative season “to work on budget and other issues related to the new coronavirus.

Where are the judicial and legislative checks and balances? It’s time to end this madness. It’s time to use one last proclamation to call our elected officials into a special session.

We deserve to hear our elected representatives weigh in on the fate of Washington’s businesses and the civil rights and health concerns of its residents.

Even President Trump — while dealing with a divided Congress — has been able and willing to work with and pass legislation related to COVID-19. Why won’t Washington’s governor work with our elected officials to govern?

We must have a robust bipartisan debate, expert testimony, committee hearings, public comments, and amendments. And above all else, our legislative body must vote before the governor either signs a bill into law or vetoes it.

Let’s follow the outlined and intended process — let’s bring our lawmakers back to Olympia.