October was a fantastic month for worker freedom in California. Hundreds of public workers in Ontario were provided information, for the first time, about their constitutional rights to break free from union tyranny.

While most workers we spoke with were ecstatic to hear the news, union leaders responded angrily.

Teamsters Local 1932 leaders were so mortified by the prospect of their workers learning of their constitutional right to opt out and stop paying union dues — without losing their jobs — they decided to revert back to what they know best: Intimidation and coercion.

Last week, like out of a scene from a bad Al Capone movie, nearly 25 Teamsters piled out of several cars and surrounded one of our canvassers while she was working in front of a municipal office building.

In addition to hurling barbs about her faith, appearance and choice of employer, they took far more sinister steps during the 20-minute confrontation.

These thugs followed her to her car, took pictures of her license plate, and proceeded to smile and wave at her as she drove out of the parking lot.

All 18 people in this picture were members of the mob. 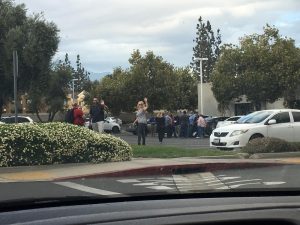 Our canvasser, who has asked to remain anonymous over fears of targeted harassment, said she spent the next hour driving aimlessly around town and looking over her shoulder. She did not want to go directly home over fears that they may still be following her.

Initially shaken, the episode only reaffirmed her belief that the work she does is important.

“I realized if so many union-ites showed up to bully one girl handing out flyers, it must be so much worse for workers who might want to leave their union.

Their plan to deter me backfired, because now I’m only motivated to work even harder.

We’re proud to have her, too.

Teamsters have a well-documented history of criminal activity.

They have engaged in bribery, embezzlement, extortion and labor rackets, not to mention the beatings and vandalism.

Teamster Local 1932 is an apple that hasn’t fallen far from that tree. Unable to argue the merits of union membership, they resort to intimidation and coercion time and again.

The Freedom Foundation and its canvassers will never back down.