Getting Organized at Home: Why Allowing States to Siphon Medicaid Funds to Unions Harms Caregivers and Compromises Program Integrity

While a perfectly defensible statement in the context of domestic workers, to which Wilson was referring, it was nonetheless an awkward choice of words given that the union that almost singlehandedly funds his organization exists primarily because it figured out a way to organize single employees working for single employers.

Medicaid — a federal program administered by states and jointly funded with state and federal dollars — pays for elderly or disabled individuals meeting eligibility requirements to receive support at home from a caregiver to assist them with activities of daily living, “defined as a broad range of support with everyday activities, such as eating, bathing, dressing, grooming, and mobility.”

For legal purposes, home caregivers are either employed by their clients and paid by the state directly for their services on behalf of the client, or they are employed by a privately owned and operated home care agency that contracts with the state to serve Medicaid clients.

While exact numbers vary by state, many or even most home caregivers serving Medicaid-eligible clients are related to the persons they serve.

Allowing clients to remain at home and select the caregiver(s) of their choosing affords them independence, community ties and control over their care. It also generally costs less than having taxpayers pay for client care in an institutional setting.

Beginning in California in the early 1990s, however, labor unions like the Service Employees International Union (SEIU) and the American Federation of State, County and Municipal Employees (AFSCME) sought to revitalize their declining memberships by organizing the growing ranks of home care workers.

While agency caregivers could be unionized under the framework of the National Labor Relations Act (NLRA), which governs private-sector collective bargaining, state-paid caregivers working directly for their clients are considered independent contractors. As such, they fall outside the scope of the NLRA. Besides, in Wilson’s words, “Collective bargaining doesn’t make sense for single employees working for single employers.”

Thus, before unions could turn one of the largest federal programs to their financial advantage, they first had to develop and implement a legal framework that would allow tens of thousands of home-based caregivers spread across a state and working for tens of thousands of separate clients to be represented by a single union that would bargain with a single public entity.

The easiest path, it was determined, would be to get state governments to place home caregivers under the jurisdiction of public-sector collective bargaining laws for government employees. However, rather than turning caregivers into full-fledged public employees — an expensive proposition given public employee wages, benefits and pensions — unions opted to designate caregivers as public employees solely for the purposes of state collective bargaining (unionization) laws. The strategy was initially opposed by AFSCME, which felt it would devalue state employment. But political realities eventually gave way to the union’s acquiescence.

The strategy was pioneered in California, where the state legislature was persuaded to allow home care workers to unionize and bargain with county officials. SEIU and AFSCME affiliates eventually organized nearly all Medicaid-paid caregivers in the state, boosting their membership by hundreds of thousands.

After achieving success in California, the unions quickly took their model nationwide, using every tool at their disposal to organize caregivers. In many states, sympathetic governors issued executive orders setting up the framework for caregivers’ unionization. In other states, unions prevailed upon state legislatures to do their bidding. In still other cases, unions funded and passed deceptive ballot measures generically marketed to voters as being about improving home care quality.

With legal authority in place, unions still had to check certain boxes before representing caregivers. In most cases, some kind of election was held for caregivers to determine whether to be union represented. However, these have tended to be little-publicized, low-turnout affairs in which a motivated pro-union minority carries the day. Suspect practices and anomalies are another common feature of many such union elections. In other cases, no election was ever held. Instead, unions simply collected authorization cards from caregivers one at a time in person and presented them to the state as proof of the union’s majority support. This method of certifying a union, generally referred to as “card check,” is known for its tendency to be highly coercive.

Once unions were established, public payroll entities withheld union dues from caregivers’ paychecks. Most states in which home care workers were organized had laws on the books allowing unions to require caregivers to pay dues as a condition of employment.

Because of caregivers’ unique employment status, the services unions can offer are relatively limited compared to traditional unions. Without a workplace, in the traditional sense, there are no workplace representation services for the union to provide; no grievances, no shop stewards, etc. There is simply no mechanism for a mother caring for her disabled child in her own home file a grievance about her working conditions. In many cases, the union’s role is limited to negotiating a single collective bargaining agreement with a single public entity ever few years setting the reimbursement rate caregivers will receive.

With few obligations to their membership, but significant dues money skimmed from caregivers’ Medicaid payments, these unions tend to be exceptionally political. Catherine Sullivan, SEIU’s Coordinator for Long-Term Care, told researchers in 2008 that, since “public sources of revenue… are used to fund contracts, a political organizing program is essential to win improvements.”

But even after becoming political heavyweights in certain states and using the dues skimmed from Medicaid to fund a host of controversial political goals and candidates nationwide, many unions still collect more in dues than they can spend.

With so much power and money in play, it is little surprise that both union leaders like Tyrone Freeman in California and prominent politicians like Gov. Rod Blagojevich in Illinois were brought down on corruption charges for dealings related to home care unions.

Many caregivers resent the amount of dues skimmed from their Medicaid payments, as well as the use of that money for political agendas they oppose, and do not see the limited service provided by the unions as of much value.

One family caregiver, Pam Harris from Illinois, challenged her state’s requirement that she have union dues deducted from her pay for SEIU as a condition of taking care of her son, Josh. Her case made it all the way to the U.S. Supreme Court in 2014. In Harris v. Quinn, the Supreme Court repeatedly denounced the compelled dues payment requirement as a “scheme,” especially given unions’ “sharply circumscribed” role in this context, and struck down as unconstitutional state laws requiring caregivers like Pam to fund unions against their will.

While a significant step forward, Harris failed to put a stop to unions and state governments colluding to exploit home caregivers through a series of work-arounds and countermeasures.

In many states, unions changed the terms of their membership forms to make it difficult for caregivers to cancel the state’s deduction of dues from their pay. To boost union recruitment, other states required caregivers to participate in captive-audience meetings with union organizers, often under the guise of a training or orientation program, who coerce or deceive caregivers into signing nearly irrevocable dues deduction authorizations. In Washington, the state will collect full union dues from a caregiver’s pay even if the caregiver never authorizes it, though it will permit the caregiver to cancel the deduction after the fact if they learn they can and how to do so.

The key factor enabling many of these coercive practices is states’ role as dues collector. If unions had to persuade caregivers to pay the union directly by check, electronic funds transfer or credit card, much of the power would be back in the hands of caregivers themselves.

Though states have skimmed union dues from caregivers’ Medicaid payments since at least 1992, there is a strong case to be made the practice has been illegal under federal Medicaid laws the entire time.

Specifically, 42 U.S. Code § 1396a(a)(32) requires that payments for services be made directly and in full to Medicaid providers. Diversions of funds to third-parties that provide no services to Medicaid recipients are not permitted.

However, the Obama administration in 2014 adopted a regulation, 42 CFR 447.10(g)(4), that authorizes the deduction of funds from caregivers’ pay for “benefits customary to employees.” Because it exceeds that which is authorized by the statute and provides some small measure of legal cover for states to engage in the coercive practice of union dues skimming from Medicaid, the regulation should be repealed and the Centers for Medicare and Medicaid Services should clarify that federal law prohibits the diversion of Medicaid funds to unions.

Some states have taken the initiative to end these arrangements on their own. Iowa, Maryland, Michigan, Missouri, Ohio and Wisconsin and have all rescinded or fought back efforts to impose Medicaid dues skimming.

However, the practice remains alive and well in at least eight states, including California, Connecticut, Illinois, Massachusetts, Minnesota, Oregon, Vermont and Washington. An attempt to unionize home caregivers in Pennsylvania is on hold pending a state Supreme Court ruling. 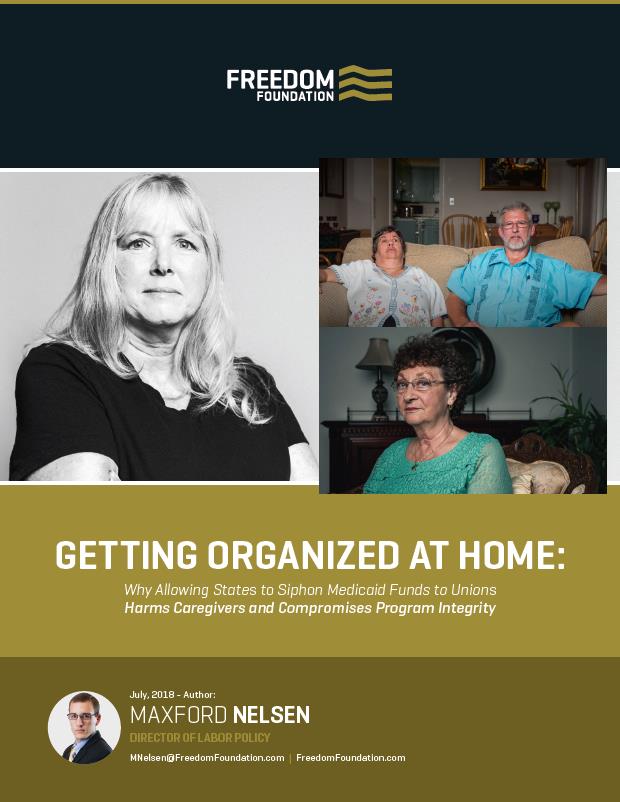