In the year since the U.S. Supreme Court held in Janus v. AFSCME that public employees cannot be required to financially support a union as a condition of employment, various efforts have been made to estimate and quantify the resulting changes in public-sector union membership.

In order to better inform this ongoing discussion, this paper analyzes the strengths and limitations of the three primary data sources available to evaluate changes in public-sector union membership since Janus.

UnionStats.com, a project of two university economists, breaks down BLS data by state and sector. It is the only resource attempting to measure union membership at this level. Unfortunately, weaknesses in the underlying survey data, combined with small sample sizes at this level, can make the estimates unreliable.

Overall, while helpful in measuring broad, nationwide trends, BLS data is of limited utility in evaluating how public-sector union membership has changed since Janus.

Annual reports filed by certain unions with OLMS provide more detailed information, including total membership and revenue. However, the reports do not include the total number of employees represented by the union, making it impossible to determine the percentage of represented employees who are members.

Additionally, unions only file with OLMS if they represent at least some private-sector employees. Not only do purely public-sector unions not file such reports, but the reports mixed-membership unions file do not distinguish between public and private-sector membership. Lastly, in some cases, information unions self-report is simply not accurate.

Nevertheless, the national affiliates of the largest public-sector unions all file such disclosures with OLMS.

In some areas, however, certain local unions have filed LM-2 reports showing far steeper membership declines. For instance, the most recent LM-2 filed by SEIU 503 in Oregon reported over 20 percent fewer dues and fee-payers just three months after Janus.

The most accurate information about public-sector union membership comes from government employers’ payroll data. In almost all states that permit public employee collective bargaining, employers deduct union dues from employees’ wages and transmit the funds to the appropriate union. Consequently, it is possible to determine a union’s membership rate by dividing the number of public employees having dues withheld from their wages by the total number of union-represented employees in a given workplace.

Payroll data indicate at least some unions have experienced significant and ongoing declines in membership since Janus. For example, the Washington Federation of State Employees has seen one-quarter of state agency employees stop paying dues or fees.

While precise, such data is not generally published and must be requested from public employers under state freedom of information laws. Consequently, the information’s dispersal among thousands of government employers makes it is less useful for trying to measure public-sector union membership by state or nationwide. It is also difficult to compile into larger time-series datasets that can be used for tracing longer trends.

Additionally, it is important to bear in mind that Janus did not automatically open the doors for all public employees to leave their union. Some public employees like their unions and want to be members. But for those who don’t like their union or are unsure about it, internal union policies and changes made to state laws by union-sympathetic lawmakers have made it difficult for many employees to learn of their rights and successfully cancel the deduction of dues from their wages. On the other hand, some organizations are attempting to compensate for unions’ Janus countermeasures by conducting proactive educational campaigns to help employees understand their rights and by providing legal assistance to employees facing roadblocks. 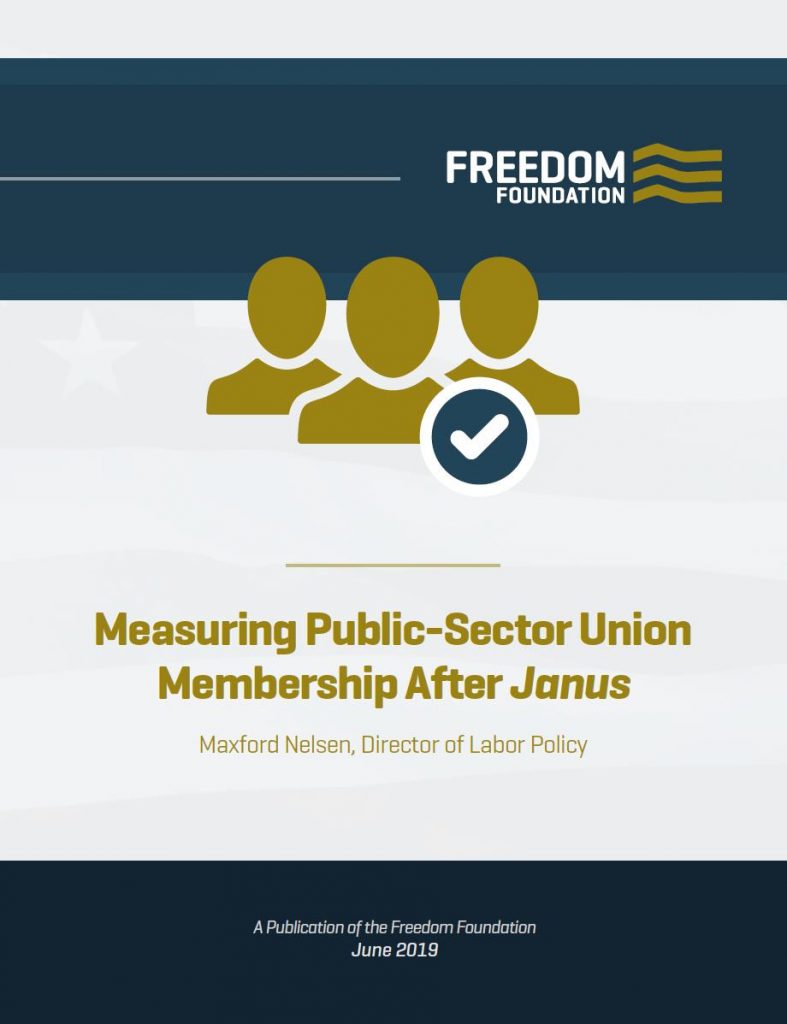 Arguments Against Vaccine Mandate set to be Heard on Mandate Deadline