President Trump didn’t make it to the White House leaving it to the mainstream media to tell his story. Starting during the campaign and continuing through his term so far, he’s made a confounding habit of going over their heads and directly to millions of Americans using his Twitter account.

And earlier this week, the president re-tweeted the Daily Caller’s article hailing his decision to scrap a 2014 Medicaid regulation allowing states to divert payments meant for caretakers into the pockets of unions. 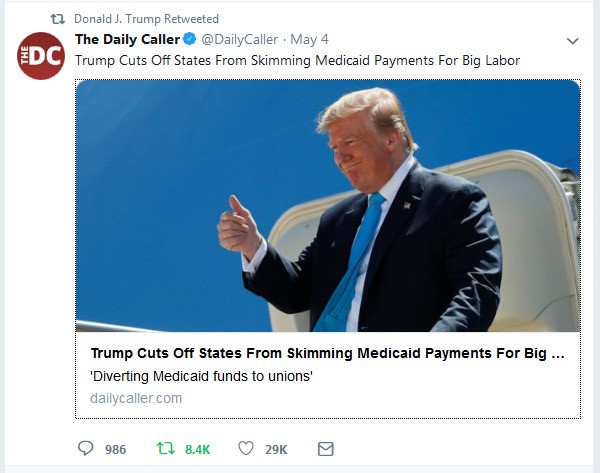 The reform was largely the brainchild of the Freedom Foundation, and the article mentions the organization prominently:

“Repealing this illegal regulation is a major victory for caregivers and those who care about protecting Medicaid from being looted by special interests,” Maxford Nelsen, director of labor policy for the Freedom Foundation, said in a statement. “States have no business, legally or morally, diverting Medicaid funds to unions.”

“Caregivers deserve to be able to choose how to spend their wages after they’ve been paid in full for their services. If they wish to support a union, that’s up to them,” Nelsen said.

The new regulation will prevent states from skimming up to $150 million per year from Medicaid payments and diverting it to other causes. The Freedom Foundation found that in 2018 eight states – California, Connecticut, Illinois, Massachusetts, Minnesota, Oregon, Vermont and Washington – were skimming money off Medicaid payments to caretakers.

The move has the potential to devastate unions like Washington’s SEIU 775, which has grown rich over the years skimming millions of dollars from low-income disabled individuals and the loved ones working to care for them. Even better, the unions will have far less to share with leftist politicians who pass laws making the whole enterprise legal — to say nothing of all the other soul-crushing legislation they leave in their wake.

When it comes to the threat to democracy posed by organized labor, President Trump clearly gets it. In a tweet the previous week, he noted:

“I’ll never get the support of Dues Crazy union leadership, those people who rip-off their membership with ridiculously high dues, medical and other expenses while being paid a fortune. But the members love Trump.”

“This rule change is a huge win for hardworking caregivers,” said Freedom Foundation CEO Tom McCabe, “and we’re extremely gratified the president and his administration recognize how despicable this practice really is.

“It’s the product of several years’ work on the part of the Freedom Foundation,” he said, “and, as always, our stalwart supporters have made this major victory possible.”