The Freedom Foundation agreed to pay an $80,000 settlement to the state of Washington, ending a nearly five-year court battle over a few thousand dollars of pro bono legal services provided by the organization to groups of citizen activists with the courage to take on Big Labor in their cities.

“This is one of the worst examples of prosecutorial misconduct I’ve ever seen,” said Freedom Foundation CEO Tom McCabe. “And when you live in a state with an AG like Bob Ferguson, that’s saying something.”

The case dates back to 2014, when government unions successfully pressured three Washington cities — Chelan, Shelton and Sequim — to each deny a pair of legally submitted citizen initiatives a spot on the local election ballot. In each city, citizen activists had gathered enough signatures to qualify the measures, which were designed to make the cities’ dealings with unions representing their employees more transparent.

When the cities refused to allow a vote on the proposals, however, the activists filed suit in each city, with the Freedom Foundation providing free legal support.

County superior court judges ultimately sided with the cities. But when the hearings concluded, a union-funded group filed a complaint with the Attorney General’s Office (AGO) alleging, among other things, that the Freedom Foundation illegally failed to disclose as a campaign expense the value of the legal services its attorneys provided at no cost to the pro-initiative activists.

In Oct. 2015, the AGO concluded “the majority of the allegations did not constitute violations of state law,” but filed suit against the Freedom Foundation for not reporting the value of its attorneys’ time to the Public Disclosure Commission (PDC).

In May 2016, a Thurston County Superior Court judge ruled against the AGO, finding the law to be “ambiguous and vague.” The AGO appealed the decision and, in Nov. 2017, the Court of Appeals reversed the Superior Court’s ruling, despite acknowledging the applicable law was “ambiguous” and “confusing.”

AG Ferguson holds his friends to a different standard

With the legal issue settled, the Freedom Foundation filed complaints in September 2019 against the three unions that had opposed the citizen activists’ attempts to force a vote on the ballot measures.  None of the unions reported the value of the legal services they purchased opposing the 2014 ballot measures to the PDC.

The state’s investigation resulted in the three unions each paying minimal penalties of $450.

The $80,000 paid by the Freedom Foundation to settle the Attorney General’s lawsuit amounted to 560 percent of the $14,296.26 in unreported legal expenses. 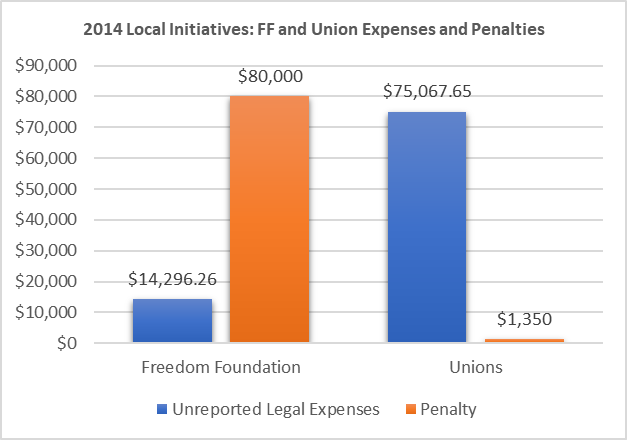 The Freedom Foundation’s insurance company determined the $80,000 settlement was likely less costly than continuing to dispute the unjustifiably high fees sought by the AGO.

In the Washington State Supreme Court’s recent campaign finance decision in State of Washington v. Grocery Manufacturer’s Association, Justices Charles Johnson and Barbara Madsen noted the AGO’s aggressive prosecution of the Grocery Manufacturers Association for failing to disclose contributions it had received to oppose a GMO-labeling initiative in 2013 appeared “arbitrary and subjective” given the comparatively light penalties sought by the AGO against the pro-labeling political effort for committing similar violations.

But the state’s massively disparate treatment of the Freedom Foundation and the unions for precisely the same violations under identical factual circumstances presents an even clearer case of political bias and selective prosecution.

“Bob Ferguson’s union friends can repeatedly break the law and buy their way out of trouble for far less than they’ve been shown to have concealed,” McCabe said. “But when it comes to his political enemies, the penalty is many times worse than the alleged violation. He has a history of actions that favor his friends and punish his opponents, and this is just the latest and most outrageous example.”