Antifa and SEIU — Joined at the hip?

Until the recent outbreak of wildfires in Oregon put a temporary damper on the Portland riots, the only thing attempting to burn down the state was the rioters themselves.

To be clear, that’s not a confirmation of the unsubstantiated rumors that Antifa members actually started some of the wildfires. It’s simply a recognition that rioters in Portland have set fire to multiple government buildings within the city over the past few months.

So yes, “Burn down the state” may be a bit of a hyperbole. But maybe not.

Because although there may be some nonviolent demonstrators among them, it has become abundantly clear that many of those in Portland carrying the not-so-proverbial torch for a movement they claim is about social justice are, in reality, less concerned with police reform than they are hell bent on tearing down the American system of government itself.

While it’s easy enough to distinguish between the violent and nonviolent, it’s more difficult at times to make sense of the various participant groups amidst the chaos — whether it be Black Lives Matter activists or the unstructured “Antifa,” for example — and to identify where the lines (to the extent they exist) become blurred.

Without speculating as to whether Antifa is playing a central role in the current unrest, it’s safe to say its members gained a reputation for doing so in the past. And the decentralized, secretive nature of its adherents makes it nearly impossible for the public to look at the ongoing Portland riots without thinking of Antifa, let alone who might be associated with it.

Considering that perception, you’d think Oregon’s mainstream political players might want to stay well away. But as evidenced by last week’s arrest of the top legislative aide to House Speaker Tina Kotek (D-Portland), that’s apparently not the case.

Now to the point:

Moving from perception to reality, it appears an even bigger political player, the Service Employees International Union (SEIU), may have been involved in planning to host at least one — if not Antifa-connected, let’s say Antifa-suggestive — event at its Portland office in 2017.

We’ll start with the disclaimer.

The event itself was ultimately canceled, and its actual organizer, a group called “Demand Utopia,” has claimed on its Facebook page that the event flyer — posted below — was created by someone “not affiliated” with the group who “erroneously depicted this event as hosted by ‘antifa’ and a training for June 4 along with violent images.”

That may be true, though it is hard to confirm. 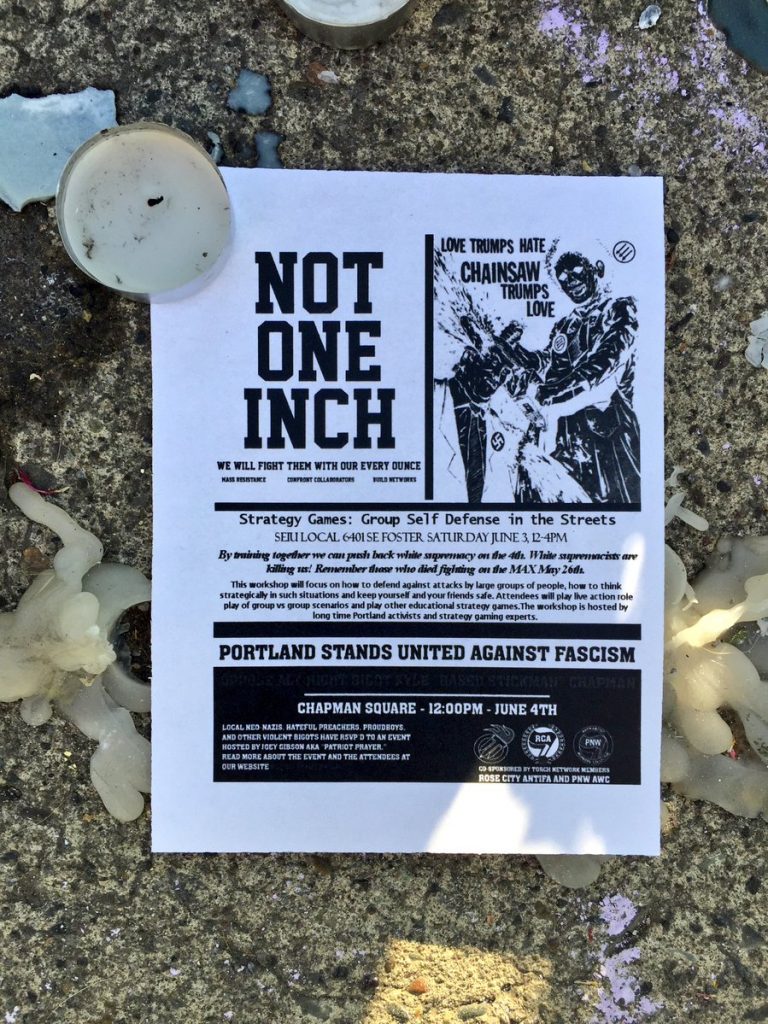 The flyer advertised the event, which was titled “Strategy Games: Group Self-Defense in the Streets,” for June 3, 2017, and listed SEIU as the host, including the address of SEIU 503’s Portland office.

It also advertised an Antifa rally that was scheduled to take place the following day, on June 4, 2017, and boasted the tagline “Love Trumps Hate, Chainsaw Trumps Love,” with an artist’s graphic depiction of a man sawing through the president’s head.

Assuming the flyer really was created by a rogue actor and that Antifa had no involvement in the event, there are still some concerning elements to consider.

First, the event was real. And according to Demand Utopia’s Facebook page, it really was set to be hosted at SEIU 503’s Portland office. The flyer — even if created by an unauthorized person and falsely depicting Antifa’s involvement — bore the same description of the event as described by the event’s organizers:

“This workshop will focus on how to defend against attacks by large groups of people, how to think strategically in such situations and keep yourself and your friends safe. Attendees will play live-action role play of group vs. group scenarios and play other educational strategy games. The event is hosted by long-time Portland activists and strategy gaming experts.”

Second, and perhaps even more concerning, the “workshop” really was scheduled for the day before a large Antifa rally on June 4, 2017. And the rally did take place.

Which begs the following questions.

Even if Antifa wasn’t directly involved in the June 3 workshop and the flyer was simply created by a rogue Antifa member trying to capitalize on the event to promote the June 4 rally, what other purpose could a “Group Self-Defense in the Streets” workshop possibly have the day before Antifa’s rally, if not to train its participants?

And what on earth were SEIU 503 leaders thinking when they agreed to host such an event?

While the 2017 rallies obviously differed from the 100-plus days of protests-turned-riots that have gripped Portland this summer, one thing that hasn’t changed during that time is the willingness of groups like Antifa to use violence as a means to advance its goals.

In a statement leading up to the June 4, 2017, rally, for example, Rose City Antifa expressed the belief that its goals sometimes required “physical militancy,” and announced that “(t)here are groups in attendance that will be prepared to handle physical opposition.”

The nation’s oldest Antifa chapter also declared it was “not opposed to the tactic of property destruction” aimed at the state.

Unsurprising, to be sure. But Antifa’s tactics are hardly the point. The head-scratching issue remains SEIU’s willingness to host such an event the day before Antifa’s rally.

On paper, SEIU 503 doesn’t seem like the anarchist type. You’d think union leaders would like government, after all, since that’s what pays their salaries — first via the taxpayers, and ultimately in the form of union dues deducted from public employees’ paychecks.

And notwithstanding union leaders’ own self-interests, do they really think their members would approve? After all, SEIU 503 claims to represent the very public employees whose buildings are now being targeted and who likely don’t appreciate finding themselves — or their government employers — in the crosshairs of anarchist rage.

The answer might be that union leaders like those at SEIU 503 are caught between a rock and a hard place. On the one hand, they need members’ dues money to survive. On the other, the gravitational pull of their existence has gradually moved away from core issues of workplace representation and increasingly towards the new center of their universe — the political and ideological agendas of their activist leaders.

One is more important than the other, as any economist or child with a lemonade stand will tell you. But it seems they just can’t help themselves.

It’s the same conundrum that caused SEIU 503 to donate more than $2.9 million of its members’ dues to a group called ‘Our Oregon’ over the past several years, then watch as the group’s recent promotion of the “defund police” movement caused more than 300 members to leave the union.

Lest any reader call these connections bogus, let’s return again to the canceled 2017 event:

Even if there were no connection to Antifa, Demand Utopia’s website depicts it as a rather strange organization for SEIU to be involved with in the first place — unless, that is, the union wants to end representative democracy and statehood as we know it (and even if it does, the organization’s mention of “voluntary association” should probably raise a few red flags for SEIU leaders).

But it appears that Demand Utopia is, in fact, a “comrade” of Antifa — at least according to a Rose City Antifa Facebook post.

So at the end of the day, maybe it’s true that Antifa didn’t actually “sponsor” the June 3, 2017, training that was scheduled at SEIU 503’s office the day before their rally.

And who knows? Maybe SEIU 503 was just renting out the space.

But it stands to reason that SEIU leaders would only rent it out to “allies,” wouldn’t they? It’s not as if they’d take a rent check from the Freedom Foundation.

In other words, there are certainly enough connections to raise eyebrows among the union’s rank-and-file members, who might never cease to be amazed at some of their union’s activity. Even if turns out that the group’s “live action role play” – or ‘LARPing’, as some call it – looked more like this than this… well, that’s concerning enough.