Battles are won but the war never ends

With one of the most consequential labor-related court cases in history, Janus v. AFSCME, announced early this year, a massive victory on behalf of the workers, we can learn what to expect by looking at ongoing battles from previous Supreme Court cases giving workers’ rights, like Harris v. Quinn.

Only a fool would think government unions will quietly disappear into the night. While the Janus decision is a tremendous blow to organized labor and its liberal benefactors, this battle is in some ways only the beginning.

From emails to lawsuits, TV commercials to door-to-door canvassing, the Freedom Foundation has been battling to inform in-home care providers of their Constitutional rights since the 2014 Harris v. Quinn court case that allowed providers to opt out of union dues and fees.

Last year a court ruling gave the Freedom Foundation access to caregiver contracting appointments, state mandated meetings where the union gets 30* minutes made available to speak to new providers.

In April 2016, the Freedom Foundation won a victory on behalf of care providers eliminating the requirement of providers to sit through the union’s 30-minute* pitch at the beginning of the state-mandated meetings.

Three great victories, and yet last week we discovered a state agency is sending out the following document to providers to warn them before they attend their contracting appointment: 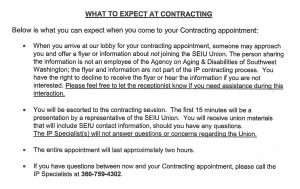 Putting aside the warning and legal advice this agency feels necessary to voluntarily provide, let’s look at the second point.

“You will be escorted to the contracting session.”

Does that sound voluntary to you? And after warning these providers about the possibility of someone who is unofficial and unwanted potentially approaching them, the use of the word “escorted” sounds like they might be in danger.

While it’s true the union has access to the first 30* minutes of the meeting (sometimes they are given time at the end if the Rep is late), it is also true that it’s not a mandatory part of the contracting appointment.  The Freedom Foundation sued over this point and won.

The inference that meeting with the union is mandatory and that the Freedom Foundation, the only “someone’s” handing out flyers explaining workers’ rights about not joining the union, “are not part of the contracting process” is misleading and questionably legal.

I called the IP specialist’s number at the bottom of the page, (360) 759-4302, to ask them some questions about this note. I wanted to ask if they were aware of the 2016 Freedom Foundation lawsuit.

What I got was an automated message, when you press 1 for payroll information you are sent to another agency’s voicemail system. When you press 2 for more information about training and continued education appointments, you are forwarded to SEIU 775.

There were more options, for example if you want to learn more about SEIU 775 you can dial 4 and get transferred to the same SEIU line as pressing 2.

I wanted to talk to the IP specialists about their bias and unethical behavior to favor the union over workers being informed of their rights. Do we really have to sue again over contracting appointments to make sure these workers are able to know and exercise their rights?

Without the Freedom Foundation fighting battle after battle in the trenches to defend the rights of workers, these major court cases giving workers their rights without the needed protections to learn about and exercise those rights will only have been a superficial victory.

*From the time the “what to Expect at Contracting” appointment sheet was received and this post about it, the contract with the State changed the time allocated for unions to have access to IP’s from 15 minutes to 30 minutes.