We get calls every day from workers who want to opt-out of their union; from people who are upset about their money being spent on politics, to those who don’t think the union is doing a good job representing them.

In the months leading up to the Janus v. AFSCME decision recognizing public employees right to opt-out of all union financial obligations as a condition of employment, many unions turned up the heat on public employees in an attempt to get them to sign so-called “irrevocable” membership cards.

After receiving calls for weeks about unions pressuring workers to sign new membership cards, we decided it was time to reach out to warn public workers about surrendering their constitutional rights. 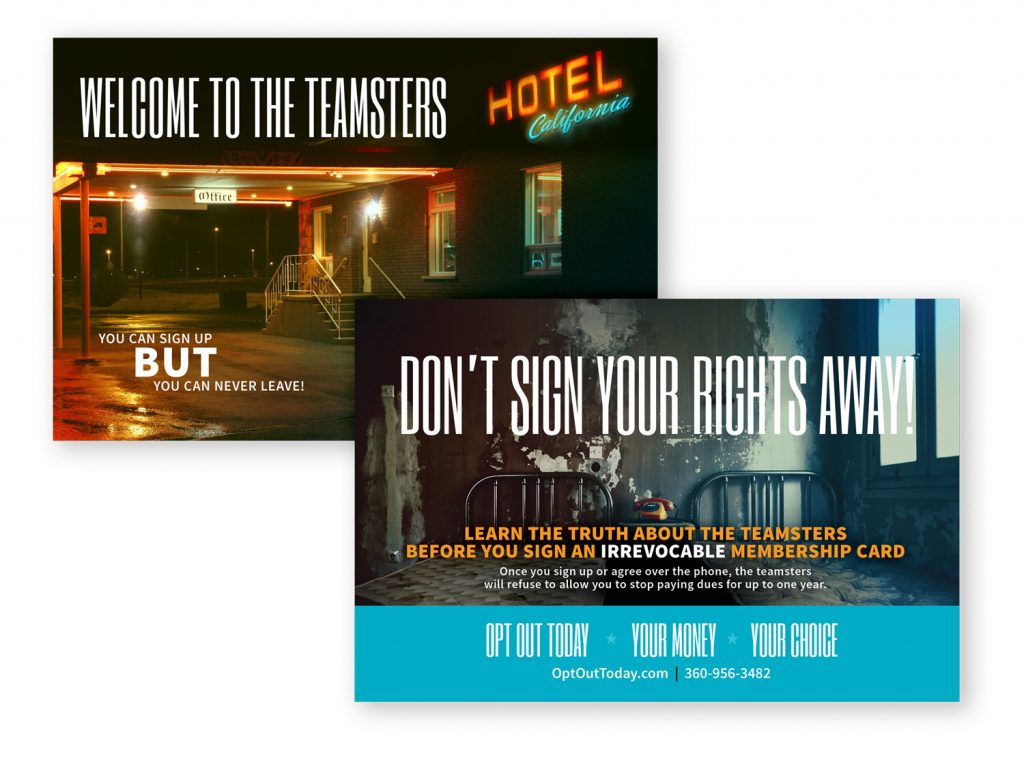 One of the first calls I received after our Hotel California mailing was sent was from a Department of Corrections (DOC) employee. It was not an unusual call, a union member was upset about his union and wanted to vent his frustrations. What was interesting about his story was that he confronted a union representative and stood up against what was happening in his workplace.

The caller explained an experience he had with Maria, the union representative who manipulatively deceived workers into signing so-called ‘irrevocable’ membership cards.

When the caller challenged the union representative about the membership cards being a “legally binding contract,” the representative rejected his claim and assured him that it would only “reaffirm his support for the union.”

The worker followed up a second time, this time mentioning the purported to be “irrevocable” language on the card, and again, right to his face, the union representative dismissed him claiming the card was something other than what it was intended to be.

At this point, the DOC employee addressed his colleagues, asking if they had signed the forms and if they understood what they had signed. He explained that the forms stated they were ‘irrevocable’ and could be legally binding contracts. He suggested everyone demand their forms back from the representative, and if they had not yet signed, to read what they were being asked to sign.

While the caller did not consider himself anti-union, he had no interest in associating with any organization that would try to trick and deceive its members into signing away their constitutional rights, in this case, lying to his face.

Apparently, some unions have not gotten the message yet. Now that people have a choice, if all unions are doing is shifting from neglecting their relationship with their members to tricking them through deception and manipulative tactics, while they may maintain higher membership rates for the short term, they are going to pay for it in the long run.

Sadly, even those who are well informed of their rights and stand up to the union don’t always escape. Several cases have been documented of union representatives forging signatures, and then illegally stealing union dues from workers.

As long as unions are going to continue lying to members, falsely telling people they have to join the union, pressuring them to sign membership forms in their homes and forging signatures, the Freedom Foundation will be here to stand up for workers.