During the just-concluded Oregon legislative session, the head of the state’s largest teacher’s union testified on House Bill 2016, also dubbed the “union wish-list.”

During his testimony, John Larson, president of the Oregon Education Association, pleaded with lawmakers to ensure the measure was passed in order to prevent the Freedom Foundation from being able to contact OEA’s members to inform them of their constitutional rights.

Larson, who moonlights as an English teacher in addition to being paid more than $200,000 a year from the union, submitted an incoherently written affidavit to the legislature, as well.

Both orally and on paper, the only way Larson seemed to think he could make a credible argument was by lying.

On the record, Larson made numerous false claims about the Freedom Foundation’s outreach campaign. His lies included asserting our canvassers pretend to be school district employees when emailing teachers and that we tell educators that opting out simply gives them a “discount” on their union membership.

He offered no substantiation of these claims.

Recently, the Freedom Foundation launched a summer outreach program to educators across the Beaver State to notify them of their constitutional rights regarding union membership.

The Oregon campaign has proved successful thus far, gaining the attention of the OEA president once again.

In response to our educational campaign, Larson released a statement addressing OEA-represented teachers.

First, Larson described our messaging as misleading and confusing. Perhaps to Larson, but to anyone with a grasp of the English language and a sense of objectivity, our words could not have been more clear.

Later, Larson again accused the Freedom Foundation of using OEA’s logo in mailers to make it appear as though the letter came from the OEA itself.

Finally, Larson warned teachers that if the Freedom Foundation’s offer seems “too good to be true,” that’s because it is.

For many educators across Oregon, being able to drop their union membership does sound too good to be true, because until the U.S. Supreme Court’s Janus decision last summer in Janus v. AFSCME banning mandatory union dues and fees, educators in Oregon were forced to support the OEA whether they agreed with its goals or not.

Luckily for them, it’s no exaggeration, as Larson claims, and it is their constitutional right to no longer give any of their paycheck to a labor organization that does not align with their values.

Although the OEA claims to be stronger than ever, why would its leaders feel so threatened by an educational campaign simply informing teachers of their rights?

Because our message resonates with their membership, and they know it.

If the Freedom Foundation’s outreach efforts were less than successful, we wouldn’t be seeing this kind of hysterical, highly emotional response from the union: 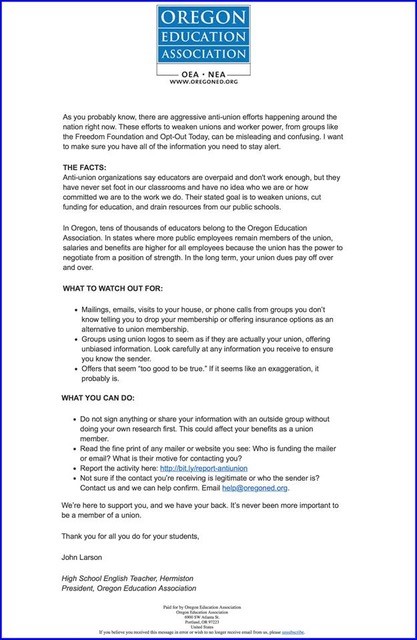