The Freedom Foundation utilizes every tool at its disposal to convey a message of liberation to public employees everywhere. This summer, the Oregon office is focusing much of its outreach efforts on the state’s teachers.

During June, these new billboards were erected across the state with a simple message to teachers — they deserve a vacation (permanently) from the Oregon Education Association. 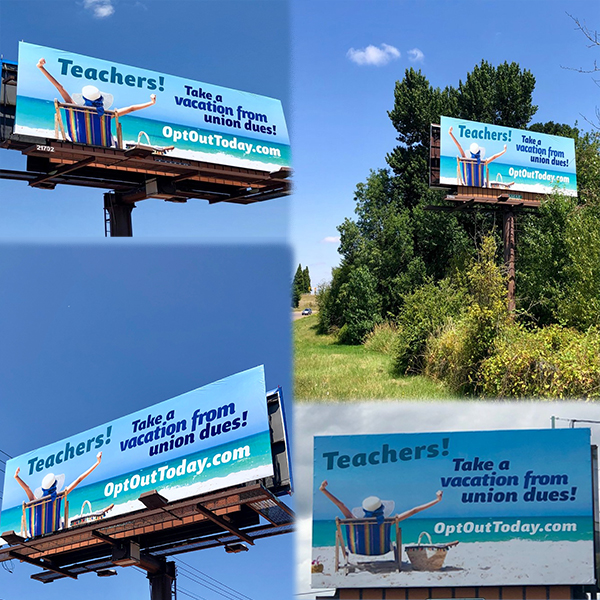 For years, teachers were required to be a part of their tyrannical unions in order to keep their jobs. However, because of the U.S. Supreme Court’s landmark ruling last year in Janus v. AFSCME, public employees — including teachers — can no longer be forced to pay union dues or fees.

Even so, according to a recent national poll conducted by YouGov, more than three out of every four teachers still haven’t even heard about Janus v. AFSCME, and more than half aren’t aware how it applies to them.

However, those numbers do not accurately reflect populations on the West Coast, where the Freedom Foundation works to actively inform teachers and other public employees about their newly affirmed rights.

There is a very clear trend in the Pacific Northwest. When teachers are told they can be free of the OEA’s intimidation, bullying and fear-mongering, allowing them to solely focus on why they became teachers in the first place — all while keeping more than $1,000 a year in their paychecks — they’re only too eager to leave.

Below are some messages we’ve received from those who have left the union and haven’t looked back.

I applied to get out of the union, and I haven’t paid dues since. It has been, to date, the biggest raise the union has ever gotten for me. Thank you all!
— Michael

My form was processed, and I am no longer having dues deducted from my paycheck. Thank you for the work that your group is doing. Furthermore, thank you for making the process easy, you are helping many public employees and I know we all appreciate your dedication.
— Jay

I’d like to thank you for creating a system that allowed me to collect a slight bit more of my paycheck and to free me from supporting the union and what it chooses to do with my money.”
—  Steven

Thank you for being the only resource out there for this kind of thing!
— John

If you know a teacher you would like to share this message with, have them visit OptOutToday.com.